Forbidden Lessons in a Kabul Guesthouse 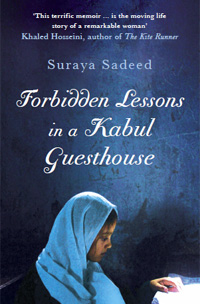 By Suraya Sadeed and Damien Lewis

Forbidden Lessons in a Kabul Guesthouse tells the true story of Suraya Sadeed, an extraordinary woman who gave up her lucrative American real estate business to run aid, education and hope into one of the most war-ravaged and dangerous places on earth – the country of her birth, Afghanistan. She went to areas where aid agencies, journalists and politicians feared to tread, defying warlords, drug traffickers, warring militias and the Taliban to bring help to those who mattered most – the suffering women and children. By camelback, bullet-pocked helicopter, ancient boat, horseback and on foot she traveled where others refused to venture, using her unquenchable spirit and her stubborn will to bring love, laughter, knowledge and caring to those who had nothing. At times beautiful, evocative and full of light, her story plumbs the depths of human suffering in a country ravaged by war – one in which Suraya never loses her humanity and her heartfelt love for those she has come to help. This incredible true story will keep readers turning the pages, and crying tears of laughter, and tears of compassion, at every turn.

Suraya Sadeed grew up in a peaceful Afghanistan. Following the Soviet invasion in 1979, she left America with her family, building a new life. But after a sudden tragedy, Suraya returned to Afghanistan for a visit that changed everything. Shocked by the suffering and destruction wreaked on her homeland, Suraya was determined to help. Smuggling herself across borders in various disguises, braving warlords and drug-runners, she set up an underground girls’ schools in Kabul in order to bring hope and aid to thousands of Afghans.

Since then, Suraya has worked tirelessly, trying to raise funds, including a $1million donation from Oprah Winfrey.