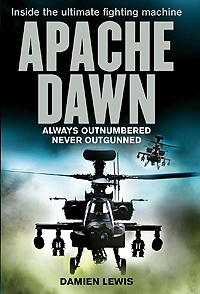 Deemed “the most advanced and significant weapons system to enter service with the British Army”, by the Ministry of Defence, the iconic Apache attack helicopter is unlike any other weapons platform in history. Designed to seek out its targets at low level, with all the refined senses of a top predator, this ferocious hunter-killer is one of the most costly weapons systems ever utilised by the armed forces. Enabling its pilots to get up close and personal with their targets, the Apache has heralded a new dawn in combat, as played out in the rugged terrains of Afghanistan.

Damien Lewis has been given unprecedented access to the Army Air Corps’ finest Apache pilots to tell their stories. Deployed to Afghanistan from May to September 2007, this elite band of warriors, operating under the call-sign Ugly, engaged in a relentless series of operations which stretched the aircraft, and themselves, to the very limit. In Apache Dawn Lewis takes the reader to the heart of an exhausting series of unrelenting combat missions, wherein the pilots pitted their grit and fortitude, and the aircraft’s unrivalled technology, against a cunning and astute enemy determined to shoot them down.

Including details of previously unreported missions, Lewis takes the reader to the core of the conflict. Apache Dawn gets under the skin and close to the hearts and minds of the airmen of flight Ugly, revealing what it is like to fly the Apache and to operate its awesome array of weaponry, exploring what drives the men involved to extremes of heroics and daring, and examining the emotional strain they face as a consequence of their actions.

Proceeds from the book are going to support HELP FOR HEROES.