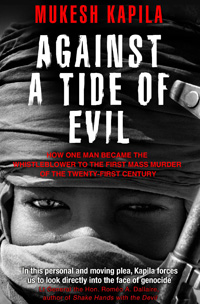 By Mukesh Kapila and Damien Lewis

In this no-holds-barred account, the former head of the United Nations in Sudan reveals for the first time the shocking depths of evil plumbed by those who designed and orchestrated ‘the final solution’ in Darfur’.

A veteran of humanitarian crisis and ethnic cleansing in Iraq, Rwanda, Srebrenica, Afghanistan and Sierra Leone, Dr Mukesh Kapila arrived in Khartoum Sudan in March 2003 having made a promise to himself that if he were ever in a position to stop the mass-killers, they would never triumph on his watch.

A Special Evil is a strident and passionate cri de coeur. It is the deeply personal account of one man driven to extreme action by the unwillingness of those in power to act to stop the mass murder. It explores what empowers a man like Mukesh Kapila to stand up and be counted, and to act alone in the face of global indifference and venality.

Kapila’s story reads like a knife-edge international thriller as he risks all to use all the investigatory powers at his disposal to bring to justice those responsible for the first mass murder of the twenty-first century: – the Darfur genocide – and is finally forced to risk all and break every rule to do so.