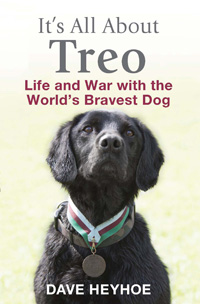 By David Heyhoe and Damien Lewis

This is the incredible true story of the unbreakable bond forged between Treo, the world’s most highly decorated living dog, and his handler Dave Heyhoe, whilst doing the most dangerous job on earth – sniffing out bombs in Afghanistan. Dave – known to his fellow soldiers as ‘the Dog Whisperer’ – and Treo were sent forwards, alone and unprotected, to detect murderous IEDs. Soon soldiers refused to patrol unless Treo was out front of them saving lives, and the pressure on the man-and-dog duo became ever more relentless and intense.

Dave viewed Treo as his best friend and like the son that he’d never had. Treo saw Dave as his beloved and trusted father. Nothing was too much for man and dog, as they gave all to safeguard the lives of soldier and villager alike. As they were shot at, blown up, menaced by capture and worse, Dave and Treo would realise they needed each other more than they could ever have imagined. This is a gripping and heart-warming story, full of tragedy and triumph, pathos and laughter, as one man and his dog dare all to ensure that every man, woman and child on their patch comes home alive.