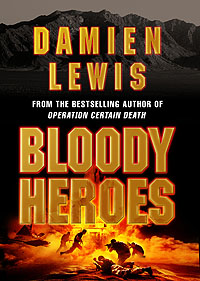 One team. One mission. The mother of all battles. Take eight of our Special Forces soldiers and pit them against 600 of the world’s most hardened terrorists. Set them to hunt each other down across the vast wild lands of Afghanistan. This is the thrilling, blood-soaked narrative of Bloody Heroes. The story starts in November 2001, when a unit of British SBS (Special Boat Service) and SAS (Special Air Service) soldiers are called upon to launch a top-secret mission. British intelligence has uncovered what they believe is a terrorist plot to attack London with a devastating weapon. A cargo ship is fast steaming up the English Channel. MI6 believes she is crewed by terrorists and carrying a deadly chemical bomb. At all costs she has to be stopped, and so the SBS and SAS are sent in.

This book follows one unit of SBS and SAS soldiers – from an action-packed assault on the high seas to the harsh wild lands of Afghanistan, as their hunt for the merchants of death continues. In the freezing Afghan mountains our band of warriors joined forces with American CIA operators – living, sleeping, eating and dying together as they took the fight to the terrorist enemy. Our team are then sent in to take out the mother of all terror-training camps, a mission with the most unexpected of outcomes. The story culminates in the single greatest battle in the Afghan war – the bloody and brutal siege of Qala-I-Janghi, an ancient mud-walled fortress crammed full of hundreds of Al Qaeda and Taliban fighters. It focuses down onto the actions of our crack Special Forces team, when faced with bitter betrayal and drawn into a deadly duel that only one side could win. It follows this handful of men as they fight against overwhelming odds to lift the fort siege and rescue fellow soldiers trapped by the enemy.

The battle for Qala-I-Janghi would last a staggering eight days – from the moment of the initial uprising to the hour that the fort yielded up the last enemy fighters. It was a battle in which 500 terrorists would be killed – but at the cost of dozens of British, American and Afghan casualties. This book chronicles every twist and turn of that battle as it unfolds hour-by-hour, until the shocking, blood-soaked finale. Bloody Heroes is a tale of extraordinary comradeship and brotherhood; of honour and betrayal; of horrific medieval bloodshed amidst an ultra-high-tech war; of fanatical hatred, suicide attacks and a terrible collective death wish; of selfless heroism and the bitter tragedy of friendly fire; of close quarter battle at its most immediate, vicious and deadly. This book brings you closer to our secret warriors than you’ve ever been ever before.