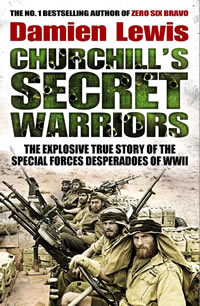 In the bleak moments after defeat on mainland Europe in winter 1939, Winston Churchill knew that Britain had to strike back hard. So Britain’s wartime leader called for the lightning development of a completely new kind of warfare, recruiting a band of eccentric free-thinking warriors to become the first ‘deniable’ secret operatives to strike behind enemy lines, offering these volunteers nothing but the potential for glory and all-but-certain death.

Churchill’s Secret Warriors tells the story of the daring victories for this small force of ‘freelance pirates’, undertaking devastatingly effective missions against the Nazis, often dressed in enemy uniforms and with enemy kit, breaking all previously held rules of warfare. Master storyteller Damien Lewis brings the adventures of the secret unit to life, weaving together the stories of the soldiers’ brotherhood in this compelling narrative, from the unit’s earliest missions to the death of their leader just weeks before the end of the war.