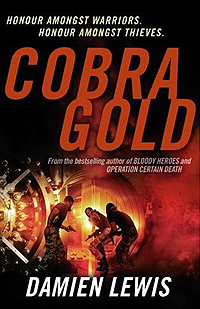 1979, war-torn Beirut. Under the cover of a massive firefight, an unknown band of armed men blast their way into the Imperial Bank of Beirut. Over the next 48 hours they load up three truck-loads of gold bullion, and the raiders and the loot disappear forever.

Six days earlier, an SAS Major newly arrived in The Regiment had tasked his men with stealing terrorist documents hidden in that bank vault. But when SAS veteran Luke Kilbride presented his plan for the mission, the Major tore it to pieces.

Kilbride didn’t appreciate this jumped-up officer telling him he was a fool. Neither did the men in his unit. Together, they decided to prove the Major wrong and rob the bank anyway, becoming fabulously rich in the process. They code-named their mission ‘Cobra Gold’.

But whilst the robbery went like clockwork, this was just the start of things going badly wrong for Kilbride and his men. Cornered on the gun-blasted streets of Beirut, they are forced to hide the loot and make a spectacular getaway.

Two decades later, Kilbride and his team return to recover their hidden gold. But unbeknown to them, a powerful and ruthless adversary is hell bent on finding it first. Kilbride dreams up a breathtaking decoy mission to lead the enemy away from the loot. So begins a deadly race against time, where the stakes being played for are survival itself.

Fact: the 1976 Beirut bank heist remains the world’s biggest ever bank job. No one has ever been arrested. The crime has never been solved. None of the gold has ever been found.

“A guerrilla force blasted its way into the Beirut vault, clearing out contents worth some 50 million dollars.” Guinness World Records