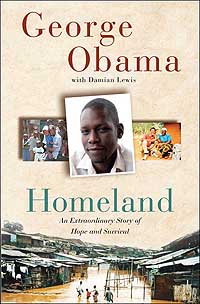 By George Obama and Damien Lewis

George Hussein Onyango Obama is the youngest son of the Obama clan, born to a Luo mother and the father he shares with the US President. George’s father died when he was barely six months old, and he spent his infant years growing up in his mother Jael’s extended family. When George was aged six his beautiful and spirited mother met and married a French aid worker, called Christian. George and family went to live with Christian in the well-to-do Umoja Estate, a suburb of Kenya’s capital city, Nairobi. Umoja is a place of white-painted bungalows and leafy, sun-dappled streets. As Christian was the only white person living on the estate, George soon became notorious as being the ‘kid with the mzungu father’ – mzungu being Swahili for white person.

Young George knew this made him different somehow. Still, he and Christian bonded over drives into the wild Kenyan bush, and games of Scrabble, Monopoly and Chess at home. And over time, generous, peaceable Christian became the father that George had never had. At age nine George was sent to attend a boarding school in the foothills around Mount Kenya. Modelled on the British fee-paying school system, this was a place of starched uniforms, regimented discipline and keen learning. After initial homesickness George thrived and he became a star pupil. He regularly came within the top five in his academic year, and his swiftness of foot earned him a coveted place on the school rugby team. Holidays were spent at home in Nairobi, where George could look forward to the presents that Christian had bought him whilst visiting his native France.

But when George turned fifteen Christian and his mother separated. By now George was attending the prestigious Dagoretti High School, a colonial-era boarding establishment in Nairobi. George reacted badly to the loss of his father figure. He began truanting, and his mother could do little to discipline her strong and wilful son. George drifted into the gang on his estate – smoking pot, and drinking. To fund his new lifestyle he resorted to petty crime. When the Kenyan police arrested George for a street robbery, Jael was beyond despair. Ashamed of how he had let his mother down, George drifted away from home – first to live with the Nairobi street kids, and then into the vast sink of the city slums. He lost himself in the sprawling chaos of the ghetto – a lawless tin-and-waste-wood shantytown that is home to two million dispossessed. Closed and dangerous to outsiders, the ghetto welcomed in this restless and troubled young man, and offered him a community and a home.

Over time George’s crimes became more audacious, as he stole to get money to share with his newfound ghetto family. The extremes of wealth in Nairobi are shocking to behold: sumptuous, gated villas sit back-to-back with the stinking shantytowns. The ghetto is rife with drugs and illegally-brewed changa’a alcohol – which offer temporary respite from the harsh reality of life in the slums. With his new life of crime George told himself that he was taking from the rich to help his people, the poorest of the poor. By the time he had turned twenty he was using a gun and carjacking. Targeted by the Kenyan police, George was arrested and framed for an armed robbery that he did not commit. Thrown into the brutal hell of a Nairobi gaol, George was too proud and stubborn to turn to his family for help in getting a lawyer, and securing bail. Instead he chose to spend nine months on remand, locked away in the inhuman conditions of that hellhole of a Nairobi gaol.

An excellent English speaker, George went on to argue his own case at trial, electrifying the court with his performance over three hearings. In an extraordinary turn of events he went on to win his case and his freedom. But prison had changed him forever. ‘Those were the darkest days of my life,’ George remarks of the months behind bars. He vowed to turn his life around. He felt certain that if he did not, he would end up dead, as many of his friends had done. Unlike most slum-dwellers, George was still able to turn to his family – both in Kenya and the USA – in his hour of greatest need. He asked for, and was given, a second chance, and was able to restart his studies. Aware of how this set him apart from those born and bred in the slums, George decided to give something back to the ghetto. He joined youth, community and charity groups, in an effort to bring hope into the lives of the slum children – those who’d never had the kind of chances that he had. Through football, photography, video work and other, truly innovative schemes, he found a way to empower the most powerless – the children of the ghetto.

George had first met his American brother, Barack Obama, when he was five years old. Barack Obama had paid a visit to George’s Nairobi school, to reach out to the youngest sibling in the Obama clan. In 2006 George met him again, at a time when Barack Obama was a Senator and already turning his eyes towards the challenge and promise of the US presidential elections. They travelled to their shared ancestral homeland, so both could rediscover the father they had barely known. Death had taken George’s father during the first months of George’s life; it was the separation of continents that had kept his American brother’s father from him. But for both men, rediscovering their father was a vital part of rediscovering their own identities.

From some in the African Obama clan George detected a sense that he wasn’t entirely welcome within their number. He was the ‘black sheep’ of the family, the ex-prison convict who hailed from the ghetto. To them he was far from being the ideal brother for an American Senator, and something of an embarrassment. But George never detected such sentiment from Barack Obama. Instead, he sensed a deep curiosity within his American brother – a desire to reach out to George and learn more about the extraordinary and unorthodox life that he had led. How had he survived? How had he persevered and overcome, and turned his life around? And what had he learned along the way?

Like many Africans, George was proud of Barack Obama’s towering ambition – only more so, for they were brothers. George celebrated his American brother’s presidential aspirations, and saw in them an inverse reflection of his own calling. In the slum children in particular George recognised an extraordinary energy and potential. Kids born and brought up in the ghetto were just crying out to be given a chance. Whereas his American brother aspired to become the leader of the most powerful nation on earth, George would become an advocate for the most powerless – the people of his slum homeland.