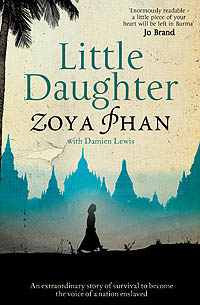 by Zoya Phan and Damien Lewis

Zoya Phan was born in the remote jungles of Burma, to the Karen tribe. For decades the Karen have been fighting Burma’s military junta, those behind the bloody October 2007 crackdown on the Saffron Revolution of Buddhist monks. She is a child of the revolution – her mother a guerrilla soldier, her father a freedom activist. Zoya’s was a typical Karen childhood. She lived in a bamboo hut on stilts by the Moi River; she hunted for edible fungi with her much-loved adopted brother, Say Say.

Many Karen are Christian or Buddhist, but Zoya’s parents were animist, venerating the spirits of forest, river and moon. Upon her birth Zoya’s father buried her umbilical cord on a sacred mountain, and prayed for her destiny. Convinced she would play a key role in the fight to free Burma, he named her Zoya after a Russian partisan who was executed by the Nazis. Her early years were blissfully removed from the war. Her playmates were blessed with magical names: Tee Ser Paw – Sweet Water Flower; Toh Mu Na – Nightingale; and Lah Ka Paw – Moonlight. Whenever her mother couldn’t find Zoya she knew she’d be out running and dancing with her best friend, Moonlight. But at age thirteen Zoya’s childhood was shattered as the Burmese army attacked.
With their house in flames, Zoya and her family fled by canoe across the Moi River. So began two terrible years of running from guns, as Zoya joined thousands of refugees hiding in the jungle. Her family scattered, her brothers deeper into the war, Zoya to a Thai refugee camp. So sick was she when she got there that doctors were barely able to save her life. A gifted pupil, Zoya now had to care for her ailing mother. Incredibly, Zoya went on to win a scholarship to study for a degree, but she was torn between study and caring for her dying mother. Still her enemies pursued her, and in 2005 she fled to the UK and claimed asylum. Asked by friends to attend a ‘free Burma’ march, she was plucked from the crowd to appear on the BBC, the first of countless interviews with the world’s media. In a miraculous fulfilment of her father’s vision she became the face of a nation enslaved, rubbing shoulders with presidents and film stars.

This is the fairytale story of the girl from the jungle who became an icon of a suffering land. Yet it ends deep in the nightmare, for six months after she started work on this book the Burmese junta assassinated her beloved father. Zoya remains unbroken still: whilst her father may have been killed, she knows that they will never kill his dream.