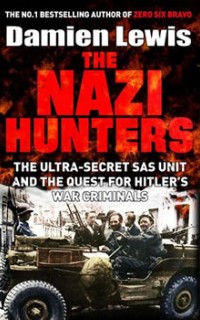 In the late summer of 1944 sixty SAS soldiers  were parachuted into the Vosges Mountains of northeastern France – the last bulwark of the defences of Hitler’s Reich. There the Fuhrer  had ordered his forces make a last-ditch stand,  to prevent the Allies from marching into the Fatherland. Dropped some five hundred kilometres behind enemy lines, the SAS were tasked with wreaking havoc and bloody mayhem, ensuring that Hitler’s do-or-die stand would fail.

From the very start these sixty men were hunted by thousands of crack German troops, as they blew up railways, ammo dumps and road convoys, and targeted high-ranking enemy officers. At mission’s end thirty-one SAS were listed as “missing – fate unknown”. In truth, they had been tortured horribly and murdered.
The man who had commanded this mission refused to let their killers escape justice. Faced with the post-war disbandment of the SAS, Colonel Brian Franks MC formed a top-secret, clandestine SAS unit. Under the auspices of Winston Churchill, this deniable “Man Hunting” force was paid and equipped from out of a black budget in a deep-cover operation lasting through 1948 and beyond. Across war-ravaged Europe they hunted down the Nazi killers, plus those who had run some  of Hitler’s most notorious concentration camps, stumbling upon some of the darkest secrets of the new war – the Cold War.

Known as ‘The Secret Hunters’, this force was peopled by a cast of characters more extraordinary than any fiction: Captain Henry Druce, who waged war from his jeep in a silk top hat and corduroys; Captain John Hislop, a champion jockey who was evicted from his former regiment for showing a ‘regrettable lack of military aptitude’; and Russian Prince Yurka Galitzine, the fabulously well-connected grandmaster of black operations.

Still studied by the SAS today, The Nazi Hunters are a founding part of the Regiment’s myth, constituting one of the great untold stories of the Second World War.