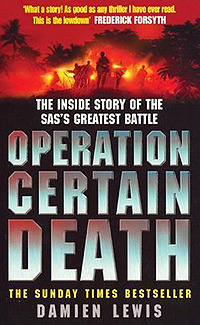 In 2000 the British SAS pulled off what many consider to be their greatest mission of all time. A group of rebels in the West African country of Sierra Leone had taken 11 British soldiers of the Royal Irish Regiment hostage. The British soldiers had been on peacekeeping operations. The rebels were a famously brutal group – called The West Side Boys – known for amputating the limbs of civilians for fun and forcing children to become rebel fighters. Over the proceeding 17-day ordeal, the British hostages – two of whom were just 17 years old – were subjected to a living nightmare in the rebels’ jungle base. This became an archetypal story of Africa’s heart of darkness. As the British military tried to negotiate, the rebels’ horrific excesses culminated in children’s heads being paraded on poles before the hostages. Finally, the British SAS and SBS were called in to mount a rescue operation, supported by the men of The Parachute Regiment. A combined force of some 75 SAS and SBS soldiers were sent in to assault a heavily defended rebel base occupied by 1,000 enemy. This is a story of how they flew into target in a lightning assault, and succeeded in their mission against all odds. The story is a modern day tale of hostages and heroes, an epic of soul-shattering confrontations.

Officially called Operation Barras, but known to the men on the ground as Operation Certain Death, it was a joint operation between the Paras, the SBS, the Navy and the RAF, but spearheaded by the SAS. Because of the traditional secrecy surrounding Special Forces operations this story has never before been told, but it is one the men themselves wanted telling. This book is that story in their own words. It is the single most daring Special Forces rescue mission since World War Two.

The West Side Boy rebels wore pink shades, shower caps, fluorescent wigs and sported voodoo charms. They believed these made them invulnerable to bullets – an impression re-enforced by ganja, heroine, crack cocaine and gallons of sweet palm wine. They terrified the local inhabitants by dressing up in monkey skins and abducting children for rape, torture and mutilation. They worshipped torture and killing. Their motto was: “What makes the grass grow? Blood. Blood. Blood.” The hostage taking was the first stage in the rebels’ planned Operation Kill British – a campaign of murder and torture of British soldiers to force the British military to abandon Sierra Leone to the rebels. Then, in Operation Kill All Your Family, the rebels would have seized power in an orgy of violence and terror.

Extensive interviews with the survivors and participants of Operation Barras have produced this blow-by-blow account, in which Damien Lewis recounts the sights, the smells, and the soul-shattering confrontations. Against amazing odds the hostages were rescued. And rather than succeeding in Operation Kill British and Kill All Your Family, the rebels were annihilated – so bringing an end to ten years of Africa’s most brutal civil war. This is the story of the rescue mission of the century in Africa’s heart of darkness.